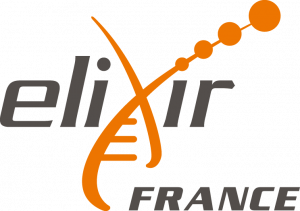 The IFB is the French node of the European infrastructure for bioinformatics ELIXIR, ELIXIR-FR. As the national node, IFB-core has a close and productive partnership with the European hub of ELIXIR based in the UK. ELIXIR is an intergovernmental organisation whose mission is to develop a distributed European infrastructure, providing scientists in life sciences  with access to resources like databases, software tools, training material, cloud storage, and computing clusters.
Life science experiments typically require a large variety of tools and generate a huge volume of data, both growing exponentially. There is thus a critical need  for data storage, together with established processes to render the data secure, findable, accessible, and interoperable. ELIXIR’s vision is the coordination of resources into a unique infrastructure enabling researchers to access and/or contribute data, share expertise, and achieve consensus on best practice.

ELIXIR-FR’s mission is the provision of tools and expertise to enrich the service bundle to the French bioinformatic community. It ensures the sustainability of the national bioinformatic resources by its involvement in the development of a long-term storage solution and data processing and analysis tools, together with the accompanying training material.
ELIXIR-FR ensures the seamless consolidation of the services it develops into the broader European service infrastructure. In doing so, its reach is European and the enhanced offer of services naturally benefits all of  ELIXIR’s platforms and communities.

ELIXIR-FR’s service bundle consists of databases, tools, IT infrastructures, and training. Those services are vital to the French life sciences bioinformatics community. Moreover the services are aligned with ELIXIR’s best-practice recommendations for platforms, recommendations that sustain and advance an open and sustainable science practice.

ELIXIR communities gather users of ELIXIR services, services that are formally recognised by ELIXIR. The role of these communities is to support the development of long-term services that answer the needs of their target research communities. The ELIXIR collaboration allows the emergence of solutions in data management, cloud computing, and data exchange among countries, solutions that are built on a stable and robust technological foundation.

ELIXIR-FR assists in the running of several communities:

There are ELIXIR-FR representatives in each of the platforms, whole role is the coordination of the French activities.

ELIXIR offers three types of training, depending on the intended audience: